The benefit of regular Sauna Use

Why Can’t I Touch My Toes?

The benefit of regular Sauna Use 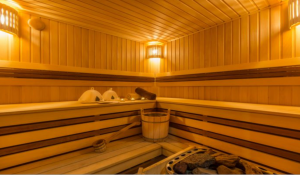 The term “sauna” is a Finnish word, and it typically refers to an unpainted spruce- or pine-panelled room, with wooden benches made of aspen, spruce, or obeche.

The bulk of the research related to sauna bathing has been conducted in Finland or in regard to Finnish-style sauna practices. Not all saunas are Finnish style, however, and saunas may differ according to their heat source, relative humidity, and duration of use. Historically, saunas were heated by wood fires – a practice still observed today in rural parts of Finland. Most modern saunas, however, are heated by conventional electric heaters or infrared heaters. Conventional heaters warm the air to a high temperature, ranging from 70°C to 100°C (158°F to 212°F), optimally at 80°C to 90°C (176°F to 194°F) at the level of the user’s face. The heat of the warmed air transfers to the body.

Repeated sauna use acclimates the body to heat and optimizes the body’s response to future exposures, likely due to a biological phenomenon known as hormesis, a compensatory defence response following exposure to a mild stressor that is disproportionate to the magnitude of the stressor. Hormesis triggers a vast array of protective mechanisms that not only repair cell damage but also provide protection from subsequent exposures to more devastating stressors.

Heat exposure has notable, but reversible, effects on male sperm and fertility measures. In a study involving 10 healthy men who underwent two 15-minute sauna sessions at 80°C to 90°C (176°F to 194°F) every week for three months, the men experienced reduced sperm counts and motility. These measures returned to normal, however, within six months of ceasing sauna use.

Some central nervous system birth defects, such as anencephaly and spina bifida, are linked with exposure to extreme heat during pregnancy. However, in Finland, where the majority of women practice sauna bathing at least once a week throughout their pregnancies, the incidence of anencephaly is the lowest in the world. Similarly, observational studies conducted in Finland and the United States showed no links between sauna use and higher incidence of cardiovascular malformations, the most common form of birth defects.

In an experimental study in which pregnant women were exposed to sauna-like temperatures, the women’s skin and rectal temperatures increased during the exposure, but all the women gave birth to healthy babies. Pregnant women with toxemia, however, exhibit increased resistance to blood flow in the uterine artery, which may compromise foetal health.  As such, they should avoid sauna use during pregnancy.

Sauna bathing is associated with many health benefits, from cardiovascular and mental health to fertility and athletic endurance. It is generally considered safe for healthy adults and may be safe for special populations with appropriate medical supervision. Heat stress via sauna use elicits hormetic responses driven by molecular mechanisms that protect the body from damage, similar to those elicited by moderate- to vigorous-intensity exercise, and may offer a means to forestall the effects of aging.

The post The benefit of regular Sauna Use appeared first on Diversified Integrated Sports Clinic.