Rehabilitation concepts for the shoulder

Rehabilitation concepts for the shoulder

Regardless of the type, injury occurs when the internal environment of the body fails to cope with the external environment that directly effects it. Whether that’s biomechanical in nature, i.e. failure of a structure, or neurological i.e. central or peripheral sensitisation, or through biopyschosocial influences.

Pain is a complex presentation, a distressing experience associated with actual or perceived tissue damage with sensory, emotional, cognitive and social components. The most common approaches to pain management and injury rehabilitation are under the influence of the more established kinesiopathological, pathoanatomical and biopyschosocial models and more recently, the movement optimist model. There are many ways of approaching rehabilitation principles in the field of injury rehabilitation. In my clinical experience, the kinesiopathological and the pathoanantomical model in particular, more often than not leads to poorer outcomes. With this in mind, more effective rehabilitative ideas should fall into primarily the the biopyschosocial and movement optimist models, with some kinesiopathological concepts when necessary, especially post surgical or after a traumatic injury. 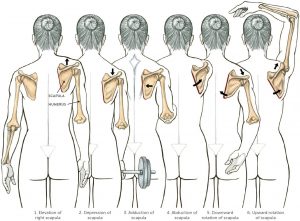 If we take the shoulder complex as an example, the most common notion in the rehabilitation of the scapulothoracic joint (the ‘joint’ formed between the shoulder blade and the thorax) is one of ‘dyskinesia’ (dysfunctional movement) and ‘in/stability’. When we look at someone walking, we automatically understand that variation from the ‘normal’ (if there is such a thing) is acceptable. However, when it comes to scapulohumeral or scapulothoracic rhythm, there is a strict model that must be adhered to. When assessing shoulder function, the traditional orthopaedic biomechanical model has assumed that variability is evidence of incorrect movement patterns. However, perhaps using a dynamic systems approach may provide a better framework for understanding scapula movement. The concept of dynamic systems theory by Sherman argues that variability reflects the variety of coordination patterns used to complete a task and suggests that variability is evidence of the flexibility and adaptability of the neuromuscular system in exploring new movement solutions.

From the many years of working with patients with shoulder injuries and working alongside other therapists who have been more prone to attest to the idea of scapulothoracic dyskinesia, promoting the idea of stabilising the scapula as if there is actual stable base from which the scapular movement occurs, I have failed to see much clinical relevance or benefit to this approach. I believe it is much more accurate to conceptualise scapulothoracic function as an energy transfer system rather than an anatomical structural base of support. As there is no geometric base for transferring loads from the upper extremity, we could view scapula function as a hub of ‘tensegrity’. After all, the scapular is suspended through 17 muscles with only one bony joint connection through the acromioclavicular joint, acting primarily as pivot point for shoulder motion in its connection the axial skeleton. If we think of the scapula as a suspended structure that transfers loads from the upper limb to the axial skeleton, it is akin to a bicycle wheel and its spokes. The scapula is the centre of the bicycle wheel and the spokes are the musculature that suspend the scapula. The scapula, supported within a musculotendinous sling could transfer forces from proximal to distal or distal to proximal. So instead of looking at the scapulothoracic joint as one with a geometric base of which is the centre of its stability or lack thereof, the stiffness of the of the sling elements could dictate the the relative ability of the system to absorb or transfer kinetic energy. The overall role of the scapula is not so much to provide a stable base but to maximise the overall degrees of freedom needed to place the hand in space and to absorb and transfer energy to and from the upper extremity. I believe this concept is crucial when applying ideas shoulder rehabilitation.

To provide foundations for this concept, studies by McQuade et al question the concept of applying motor control theory to scapula control, one of the the prevailing methodologies for shoulder rehabilitation. The idea that we can rehabilitate shoulder pain through specific muscle activated motor control drills has little to no evidence of long term benefits. Engrained motor patterns are not easily changed by conscious control, i.e. activation drills, and there is little biological plausibility in this approach either when it comes to functional carry over, and higher-order structures within the nervous system have a greater movement synergy than that with individual muscle control. It is highly likely that that the position of the scapula and its equilibrium are in fact low priorities for the central nervous system.

As is with all areas of the body, the scapualothoracic joint in particualr is one that is heavily influenced by its local ecosystem. The scapula functions within the idea of tensegrity, held in a musculotendinous sling that acts as an energy transfer system between soft tissue structures. Through a highly varied movement assessment and rehabilitation program, the primary effects of this approach should be focused on cortical re-organisation of a potentially distorted body map in our brains, the area that governs our motion. Rehabilitation should be focused around its training effects on the the brain and the central nervous system, improving coordination and proprioception, neural mapping, reducing smudging through the use of simple to more complex coordination patterns. We need to recreate higher coordinative connections of the musculotendinous sling that the scapula is the centre piece of. Creating better stiffness, communication between the higher-order structures and the hand will improve function, robustness, resilience and movement quality as a result.