Nutrition and the Musculoskeletal System

It was the last two minutes of a rugby game; the ball was passed to me and I saw an open space leading to the end zone; I was going to score and my team would win.

For a split second this plan seemed totally feasible.

I planted my lead leg, put my head down and pushed off in a sprint towards glory. First step, second step, third step, then it happened. I did actually score. We did end up winning. However, I was losing.

After my third stride, I felt a painful twinge in the back of my right leg. Then my fourth, fifth and sixth strides all felt shorter, slower, weaker and painful. I had pulled my hamstring. This would be an injury that would show itself more than once over the course of 4 years afterwards.

Hamstring injuries (HSI) are common in sports that require powerful forceful movements such as sprinting and jumping. In the NFL, HSIs account for 12% of all primary injuries. They are the most common injury in professional soccer and account for 29% of track and field injuries in sprinter. It’s safe to say that if you’re a lawn bowler- you’re in the safe zone.

The problem with HSIs is that there is a high reinjury rate. The average amount of time missed from sport is 18 days, however actual time missed is often greater and costly. This is due to the complex nature of the hamstrings- a group of three muscles. Injury can vary in types, location and size, thus making it difficult to make recommendations regarding rehabilitation and prognosis about healing time. The greatest incidence for re-injury occurs within the first two weeks after return to sport.

Let’s start with the basics – Anatomy

The hamstrings are a collective group of muscles located on the backside of our thigh. These muscles are: the biceps femoris, semitendinosus and semimembranosus. Together, these muscles work to flex (bend) the knee and extend (straighten) the hip. These muscles have long tendons (the connection between muscle and bone), which help develop a “spring” effect that accentuates performance during athletics. This “spring” effect can also lead to increased susceptibility to injury.

HSI can occur in either a high speed state where the muscle is overstrained or in a slow speed state where the muscle is overstretched. The two mechanisms of injury contrast one another and generally occur in different locations. The most common mechanism of injury to the hamstring is during sprinting and is believed to occur during the terminal swing phase of the gait cycle (when your leg is fully extended out in front). At this point the hamstrings are actively lengthening (eccentrically contracting) and absorbing energy from the decelerating limb to prepare for ground contact. The biceps femoris is required to contract forcefully while lengthening to decelerate the extending knee and flexing hip. At this point, the biceps femoris is placed under the greatest amount of stretch (110% of its normal length!). Terminal swing is a particularly vulnerable position for bicep femoris injury due to its high activation in a lengthened state. Think about the story in the beginning…kind of makes sense now right? Still don’t understand? Think of a tug of war- quadriceps vs hamstrings. If one side is stronger than the other, the weaker side will lose the battle and break down. If there is a good balance of strength, the rope will stay at a standstill and no one loses- no breakdown.

HSIs that occur during slow movements such as dancing or stretching involve simultaneous hip flexion and knee extension placing the hamstrings in an extremely lengthened position. The upper semimembranosus is normally affected in this condition. Although this mechanism of injury is often less painful at onset, it tends to require a longer recovery period than a HSI incurred in a high speed state.

Injuries of this nature are usually referred to as a “muscle strain”. I prefer to classify a muscle injury as a functional muscle disorder but that’s another story for another blog post.

Grade 1- the muscle or tendon is overstretched. Small tears to muscle fibers may or may not occur. Symptoms include pain with or without swelling

Grade 2- the muscle or tendon is overstretched with more fibers torn but the muscle is not completely torn.  Symptoms include pain, swelling, bruising and decreased movement due to pain.

Grade 3- the muscle or tendon is mostly or completely torn or ruptures. Symptoms include pain, swelling, tenderness, bruising, movement will be difficult.

The main goal of physical therapy for a hamstring injury is to return the athlete to sport at the prior level of function, without pain, and with nominal risk of re-injury. As mentioned earlier, recurrence is of serious concern particularly within the first 2 weeks returning to sports. Persistent weakness in the injured muscle, reduced extensibility of the tissue due to residual scar tissue and adaptive changes in the biomechanics and motor patterns of sporting movements following the original injury should be addressed.

In 2014, a few Swedish researchers looked at rehab protocols for hamstring injuries and compared them in treating elite sprinters and jumpers. They found, what I deem to be, a successful treatment program for grade 1 and 2 HSIs:

From date of injury to start of rehabilitation protocol, take 5 days to R.I.C.E it. (rest, ice, compress and elevate.). When icing, I’d suggest a 10min on/ 10 min off/ 10 min on approach. Try to do this once every hour.

The exercises – each exercise should be performed as described below without pain. If pain is experienced, reduce the range in which the exercises are performed. 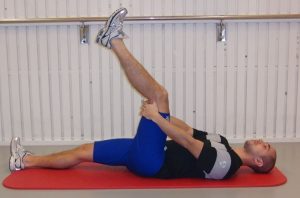 L-1 ‘The Extender’ – The player should hold and stabilise the thigh of the injured leg with the hip flexed approximately 90° and then perform slow knee extensions to a point just before pain is felt. Twice every day, three sets with 12 repetitions 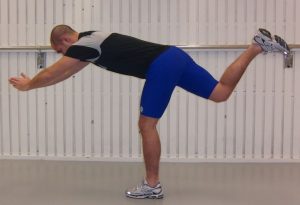 L-2 ‘The Diver’ – The exercise should be performed as a simulated dive, that is, asa hip flexion (from an upright trunk position) of the injured, standing leg and simultaneous stretching of the arms forward and attempting maximal hip extension of the lifted leg while keeping the pelvis horizontal; angles at the knee should be maintained at 10–20° in the standing leg and at 90° in the lifted leg. Owing to its complexity, this exercise should be performed very slowly in the beginning. Once every other day, three sets with six repetitions 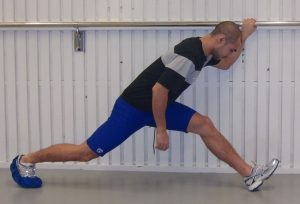 L-3 ‘The Glider’ – The exercise is started from a position with upright trunk, one hand holding on to a support and legs slightly split. All the body weight should be on the heel of the injured (here left) leg with approximately 10–20° flexion in the knee. The motion is started by gliding backward on the other leg (note low friction sock) and stopped before pain is reached. The movement back to the starting position should be performed by the help of both arms, not using the injured leg. Progression is achieved by increasing the gliding distance and performing the exercise faster. Once every third day, three sets with four repetitions.

When this can be performed without pain an addition of 6X 20m, 4X 40m and 2X 60m high speed running drills should be added in 3 times per week.

*keep in mind this protocol is aimed for track athletes. For sports with lateral movements I’d suggest the addition of figure 8s and ladder drills.

I hope this provides insight into hamstring injuries. If you are struggling with reoccurring hamstring issues and you’re in Dubai, I’d suggest coming by DISC to get checked out by a competent health care professional!